This beer is a salute to the ingenuity and creativity of the American craft brewers. A uniquely American style of beer, the Double or Imperial IPA, has become the calling card of many craft brewers who aren’t afraid to push the limits of what hops can add to a beer. This beer is big and hoppy – not for the faint of heart! Be prepared to experience sensory overload as you savor this Imperial IPA.

The sensory profile is of hops, and lots of them. The aroma is bursting with the classic citrus and pine aroma of American-grown hops. The flavor is dominated by a hoppy bitterness, with just enough malt to make you want to take another sip. 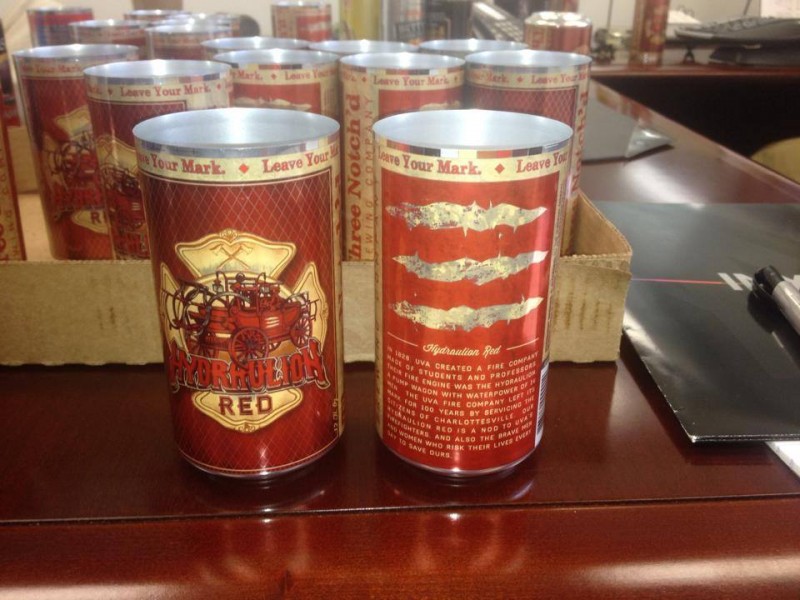 In 1828, the University of Virginia created their own fire company made up of students, professors and servants. Their sole fire engine was called the Hydraulion, a pump wagon with the waterpower of 16 men. The UVA Fire Company left their mark for almost 100 years before giving way to the town of Charlottesville’s Fire Department. Our Hydraulion Red is a nod to not only UVA’s firefighters, but the brave men and women everywhere who risk their lives every day, while saving ours.

This Irish-Style Red is a perfectly balanced beer with a great caramel sweetness alongside a tangy, citrusy hop profile.

This easy-drinking session beer pours a deep golden color. It smells slightly floral and herbal, thanks to a hopback full of Cascade and Centennial hops. Gold is tasty and refreshing, with a round mouthfeel. In 2010, it took awards at both the Great American Beer Festival and the World Beer Cup.

A robust dry Irish stout, with a rich roasted malt aroma. Smooth and velvety on the palate, concluding with a lingering dryfinish. ODIS is another in a long line of great Irish inspired beers. Searching for a pint of gold? Meet ODIS…

This brew is an India Pale Ale by style, but that is where the similarity to most IPAs ends. Each consecutive batch of Hop Project is brewed with a different blend of spicy, aromatic hops, never using the same blend twice. It’s a hop-head’s dream come true!

Check the bottled-on date and their blog to decode what specific hop varieties they used in that batch.

Their annually released Barleywine changes every year depending on what mood they’re in. It is, however, always a “big” beer, usually around 10% ABV. Enjoy now or cellar for a special occasion.

In 1935, Richmond, Virginia made beer history as the first place ever to sell canned beer, a cream ale from Krueger Brewing Company. A tribute to the original canned beer, Hardywood Cream Ale is an unfiltered example of the style that embraces its east coast roots with an unbelievably smooth body and a refreshingly clean finish from extended cold conditioning in the lagering tanks. Raise a can to RVA, where the canned beer revolution began!

Monumental® IPA is a rich copper color, and is intensely hoppy. They add a special blend of American hops throughout the brewing and fermentation process to create a complex combination of aroma and flavor. This ale exhibits floral notes, flavors of citrus and resin, combined with delicious caramel background notes. Their IPA’s perfectly balanced style will keep the palate fresh and invite the drinker back into the glass.

Starr Hill’s Jomo Vienna Lager is a smooth, multiple-award-winning Vienna-style lager. Fermented with Southern German Lager yeast, its crisp, clean taste, and noticeable hop aroma are effectively balanced with a slight malty sweetness. This is a crossover beer that appeals to the broadest spectrum of brew aficionados.

If you liked this post, you might also enjoy 7 Mid-Atlantic Brewmasters That Rock and 9 Beers To Try In DC, RVA, CVille!