About 35 miles north of Cincinnati, Middletown is a city located in southwestern Ohio with a population of 50,987 people. It’s home to a Miami University regional campus and was named an “All-American City,” an award that recognized Middletown’s success in bridging equity connections amongst residents, businesses, nonprofits and government leaders.

Middletown also created the first Designated Outdoor Refreshment Area (DORA) in Ohio history. In February, 2021, Middletown City Council approved the continuation of the DORA for another five years and even expanded the district because of its booming popularity with locals, students and tourists alike.

“The DORA has proven to be successful in Middletown,” Assistant City Manager Susan Cohen explained to the Butler County Journal Newspaper. “The city has been able to maintain public safety and sanitation in the area with limited problems or on-going concerns.”

I’m sharing this Middletown perspective because on Wednesday I had a pleasant Facebook exchange with my friend, Charlottesville Mayor Lloyd Snook, who explained to me, “Realistically, a [DORA] is not a major tax revenue source.”

Respectfully, I disagree with Mayor Snook. 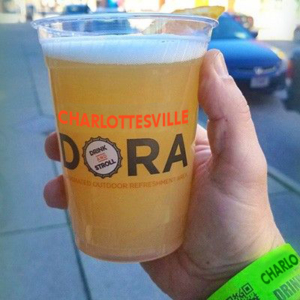 Currently, the City of Charlottesville is so desperate for revenue it is advertising a 10-cent real estate tax rate increase, a regressive tactic that if approved will undoubtedly create financial hardship for Charlottesvillians and drive gentrifying tailwinds behind an already homogenous and wealthy community.

Instead of leveraging regressive strategies associated with taxing home ownership, City Council should consider new incremental tax revenue sources, including a Designated Outdoor Refreshment Area on The Charlottesville Downtown Mall. I have outlined how this CVille Downtown DORA concept would work and how the tax revenue could be allocated to city school reconfiguration. Please read that analysis here: https://ilovecville.com/thedowntownmallbiergartencanhelpfundcharlottesvillecityschoolreconfiguration/

In 2021, the Ohio Department of Commerce reported a 300% increase in active DORAs across the state. The Middletown DORA is open seven days per week from noon to midnight. There is a $1 charge for a bracelet that allows customers to drink, walk and enjoy Middletown while patronizing its locally-owned businesses within the DORA district. This model is literally win-win-win. Middletown earns incremental tax revenue from the DORA. Locally-owned businesses say they see more customers than ever. Consumers are able to support their favorite restaurants, breweries, wineries and shops while strolling with their beverage of choice in hand.

Monica Nenni, the co-owner of West Central Wine, which is located within the Middletown DORA district, described the biergarten as paramount to the municipality’s economy.

“It’s an investment in the future of business in Middletown,” said Nenni, who is also the Vice Mayor of Middletown.

While there are hundreds of DORAs located across the country, Charlottesville City Council is reluctant to try the concept despite the proofs of performance that exist, including in Middletown, a city with nearly an identical population to Charlottesville.

“Let’s not do a ‘biergarten’ out of a desire to get short-term meals and sales tax revenue,” Snook wrote to me on Facebook. “It’s something, but [it’s] hardly a game-changer.”

Do we not want incremental sources of tax revenue in Charlottesville? Are we not concerned that raising taxes on rooftops will further push fixed-income, low-income and first-time home buyers out of Charlottesville? Is Charlottesville City Council aware that Albemarle County is currently considering the DORA concept and eager to capture the tax revenue associated with it? If Albemarle County integrates a DORA or multiple DORAs, does City Council realize it will lose some of its tax base to its jurisdictional neighbor?

These questions have one obvious answer:

If countrywide evidence is any proof of performance, the DORA will be safe, controlled and a foundation for incremental revenue that can be allocated to equity endeavors like school reconfiguration.

In conclusion, I respectfully ask Charlottesville City Council to consider a DORA on The Downtown Mall now. Our community counts on Council to make decisions like this.